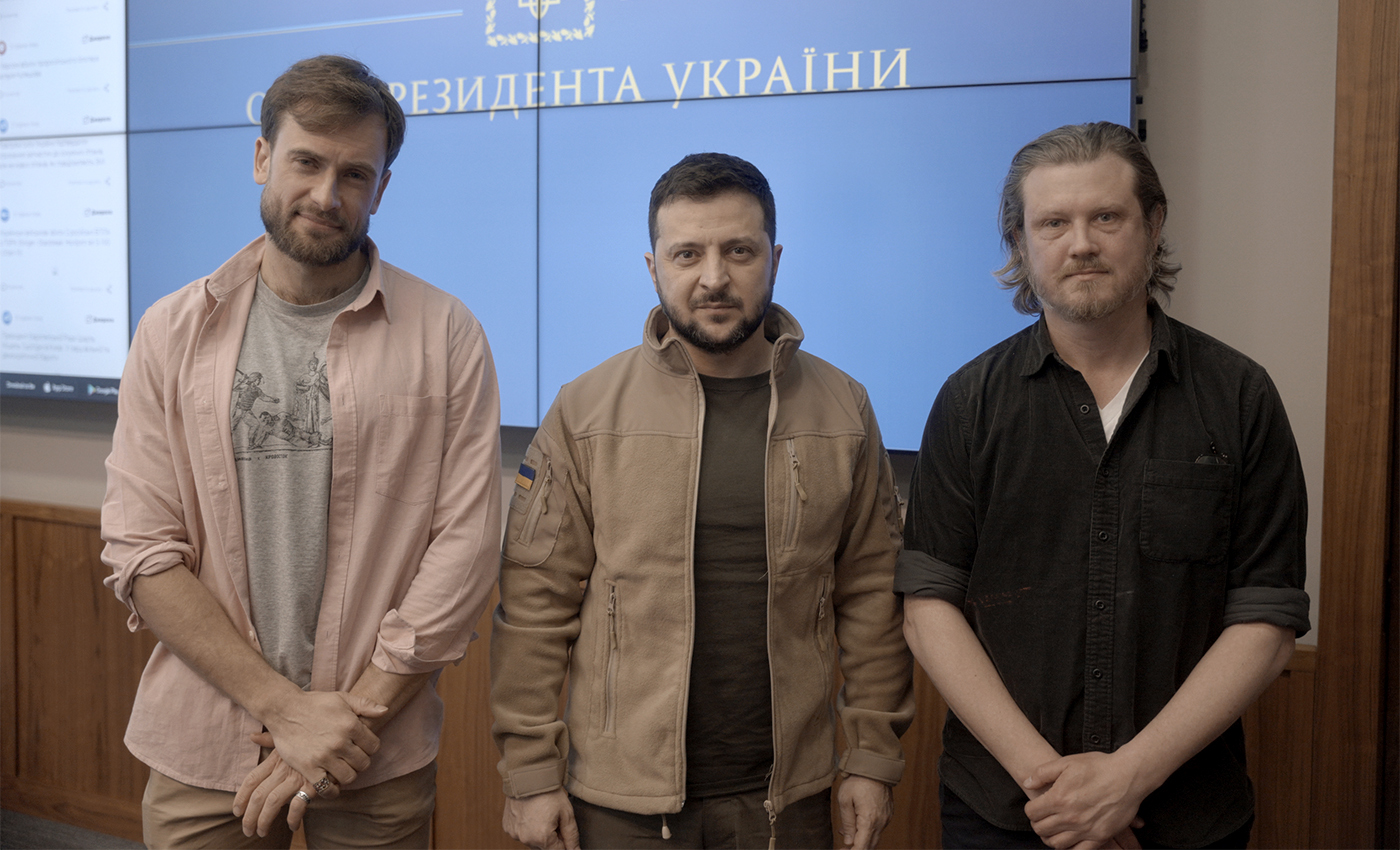 Mediazona publisher Peter Verzilov, Volodymyr Zelenskyy and film producer Beau Willimon; Verzilov and Willimon are collaborating on a documentary about the war in Ukraine / Mediazona

Can massacres ever be forgiven? What needs to happen so that Ukrainians' feelings towards Russia begin to improve? How important are the voices of ordinary Russians opposing the war? President of Ukraine Volodymyr Zelenskyy’s first face-to-face interview with a Russian journalist since the start of the invasion is with Peter Verzilov, Mediazona publisher. Verzilov is collaborating with film producer Beau Willimon on a documentary about the war in Ukraine. Zelenskyy sits down with Verzilov in his office in Kyiv to speak about the responsibility, forgiveness, and possibility of peace.

— There has been much talk about how attitudes towards Russians have changed in Ukraine after the invasion began. What do you think it would take for those feelings to improve? What should Russians do and what should Russia do to make it different?

— This is a very difficult question. I am not sure there is an answer at all today. I don't think anyone really knows. We are only at the start of this process.

Russia has made a tragic mistake. They attacked us, they seized a huge part of our land, they took people's lives, they brutally murdered people. Admitting this is like going to church, saying it out loud, confessing. That’s a normal thing to do. I think forgiveness is not up to us, God will or will not forgive you. That's how I feel about it.

Maybe future generations will be able to move towards reconciliation. But there's no future without admitting it. Admitting does not mean saying a few words. It is not about words, it’s about action. It is about putting a stop to it all. It is about reaching out, "Well, we've taken a lot from you. What should we do now? How can we make you whole again?". And then that's the start of the process, I guess.

— And what actions do you think can be taken? Do you see those actions now?

— No, there's nothing of the kind at the moment. There are certain people, citizens of the Russian Federation, who have left the country, or people like the actress Liya Akhedzhakova who is still in Russia but we see her appeals for peace. Even if one, two, or three social networks are blocked, a little goes a long way, and the truth finds its way, right? We see her stance.

It doesn't really matter if a person lives in Russia, it doesn't matter where they live. Do I care about the kind of passport one has? No. But she speaks out, she admits that it is a disaster and she expresses the anti-Putin sentiment, anti-war sentiment.

Just think about the really scary thing: many ordinary people in Russia support this war. A lot of them. That is what's frightening. And after you support it there's no way you can say later that you didn't hold the gun in your hands. Yes, you did. You had an assault rifle. Just because you don't pull the trigger doesn't mean a thing. That's the kind of thing I think you should keep in mind. It's important.

A catastrophic mistake has been made by a group of people in power. And they succeeded in dragging the whole nation into it, thanks to their grip on information channels. And by plunging the generations of Russians who are alive today into this disinformation field and this massacre – because it is not a war, it is a massacre – they jeopardise historical ties, cultural ties, and so on.

A catastrophic mistake has been made by a group of people. They have sucked an entire nation into it, thanks to information policy. And by throwing these living generations of the Russian Federation into this disinformation and this massacre - because it is not a war, it is a massacre - by throwing them all in, they have opened the question of historical things, cultural things, and so on.

Now many folks in many countries will no longer guess if a Russian is a good guy or a bad guy. They will have an attitude. That's a scary thing. Not for me, but for your people. Because there were a lot of different things in history – discoveries, artists, culture, scientists – lots of great stuff happened. After a massacre like this one, people would not want to hear about all that. They won't, I am pretty sure of that. And it seems to me that's the hardest blow.

Russian politicians are so immersed in this narrative of historic significance, justice, fight against Nazism, or whatever that they miss the point: this massacre will never go away. And it cannot be forgiven.

There are families that have lost someone. Will they forgive? No. You and I can understand that, can't we?

Remember Nazi Germany? We do. We realise that not everyone in Germany was a Nazi. But who will look at those details now? Not many. Why did you keep silent, why didn't you do anything about it? Why, when the Nazis were executing the Jews, why were you hiding behind something, as if you didn't want to see it, why did you stand by and let it happen? Why? Sure, you were afraid. You were afraid, but some were passing by and kept on being afraid, and some weren’t, they would try and hide the Jews. Someone even scribbled a leaflet quietly, to put it up on a wall. Small steps, you know.

They think, “What can I do, what’s in my power? I’m just an ordinary man. If I come to the Red Square (or wherever they go on rallies), to Manezhnaya Square, they will swiftly throw me into the police van! No one will hear my voice!” Oh, but we will. They will.

At least your children and your grandchildren will hear it, and they will say: "My dad tried to protest, but they took him away". But no one will ever say that you didn't do a thing – that would not be true. Everybody sees everything. Hence, a long process.

— How do you envision Ukrainian-Russian relations in some two decades? And what should the world look like for you to be able to come to Moscow, for example?

— In 20 years, I am quite sure, it will not be my watch to be concerned by Ukraine-Russia relations. Personally, I will care about it. I do care about what is happening to my country. And I will definitely care about relations with our neighbours, with all neighbours. But in 20 years Russia will have another president. Ukraine too. At the very least I’m confident that Ukraine will. And Russia... well, who knows? (laughs) It is ridiculous but it's possible to imagine Russia under the same president, thanks to some new technology.

Look, I do not want to offend you. Of course, there will be someone new. And if you pierce the information bubble, like a child bursting balloons with a needle, if another president dares to pierce that bubble for the Russian people, they will have an awakening in 3-5 years, I think. Information moves fast.

Unfortunately, some of them would not accept it. Because some mistakes are beyond the human ability to admit guilt, particularly mistakes as bloody as this one. But some of them will wake up. With their eyesight cured, intellectuals will be pulling the hair out of their heads – if there are any left. But they will definitely have an awakening. And then we will again arrive at the choice I was talking about. The choice for the country's leader and the people to make.

This leader must say: "We are ready to admit it”. He or she will have to take this step. It is a very important step. And the people will have to follow their leader because they elected him or her to guide them on this path. So, say it: "Yes, it happened". That will be the first big step for politicians. And politicians will certainly be meeting and talking. The sooner it happens, the better.

— In that kind of a world would you be able to come to Moscow?

— Well, you know how the end justifies the means. I am ready to travel anywhere in the world if that will help my country, but certainly not now, and certainly not to Moscow. It is simply impossible. But, of course, with other people and under other circumstances, everything will probably be possible. But after everything that has happened, I am certainly not going to enjoy it.