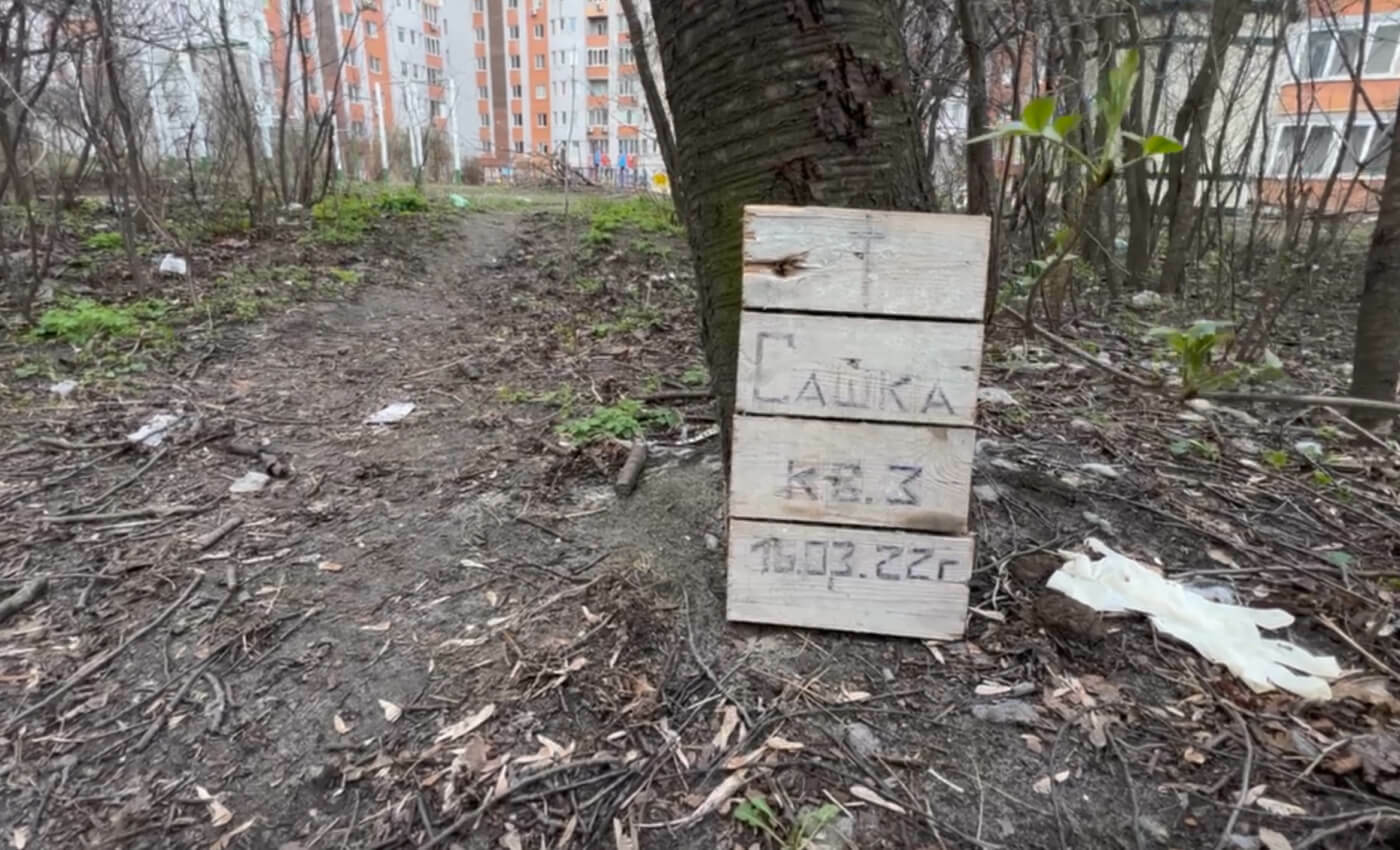 The atrocities in the town of Bucha have become emblematic of the actions of the Russian troops in Ukraine. More than three hundred civilians killed in a month's time, many of them executed and some tortured. Witnesses describe one of those murders: a man was sitting on a bench with his phone, the military did not like it, so they took him aside and shot him.

Bucha, a small town in the Kyiv region, has been under the control of the Russian military for about a month. Some civilians managed to flee, but most remained in Bucha. At the end of March, when the Russian military left the city and the Ukrainian security forces and journalists were able to get there, they saw evidence of numerous war crimes, executions, and torture of civilians. Now forensic investigators are exhuming mass graves there. According to the mayor of Bucha, they found bodies of 320 killed – so far only half of them have been identified.

Corpses littered the streets of Bucha, some with their hands tied behind their backs. Those people were killed with shots to the back of the head. One of those executed this way was Alexander Melnychuk, 49, the father of Eva Karitskaya, the ex-wife of famous Russian rapper Pasha Technique.

Karitskaya said her father decided against leaving Bucha following the arrival of the Russian military but sent the rest of his family away. "Dad was supposed to join them a bit later, but the situation there got tense and when the sole evacuation from his apartment block started he and another man were busy bringing a wounded person to the hospital. When they came back, the evacuation was over, no one was there," she recalled.

Alexander spent two weeks in Bucha like this. According to his neighbours, on March 16, the Russian soldiers noticed Melnychuk taking pictures of something outside his apartment block, blindfolded him, took him to the bushes at the edge of his yard, and shot him dead. The soldiers would not allow the neighbours to bury Alexander until several days later when they were able to do so. A plaque was placed on the shallow hole in the ground: "Sashka. Apt. 3. 16.03.22".

Mediazona publisher Peter Verzilov went to Bucha, visited Tarasovskaya Street, and recorded the accounts of the victim's neighbours who witnessed his execution.

They took him from here, from the bench, blindfolded him, took him to the bushes over there. He came here to talk to the soldiers, to chat. He was sitting on the bench over there, it is now destroyed, he took out his mobile phone... started making phone calls or taking photos, well, doing something. Then they searched his backpack, there was also a [device] to charge the phone. They took away the phone and smashed it, it was around noon or one o'clock.

Then they blindfolded him, one of them grabbed him by the arm, and the other one walked behind him with an assault rifle. They took him [to the bushes]. The soldiers were not wearing masks, only helmets, with a typical Slavic look. We practically didn't speak to them, except to say 'may I pass' or 'hello'.

They were the crew of the tank that was parked here. That is what I saw from the third floor. I couldn't see the shooting, he was killed over there, I couldn't see anything. 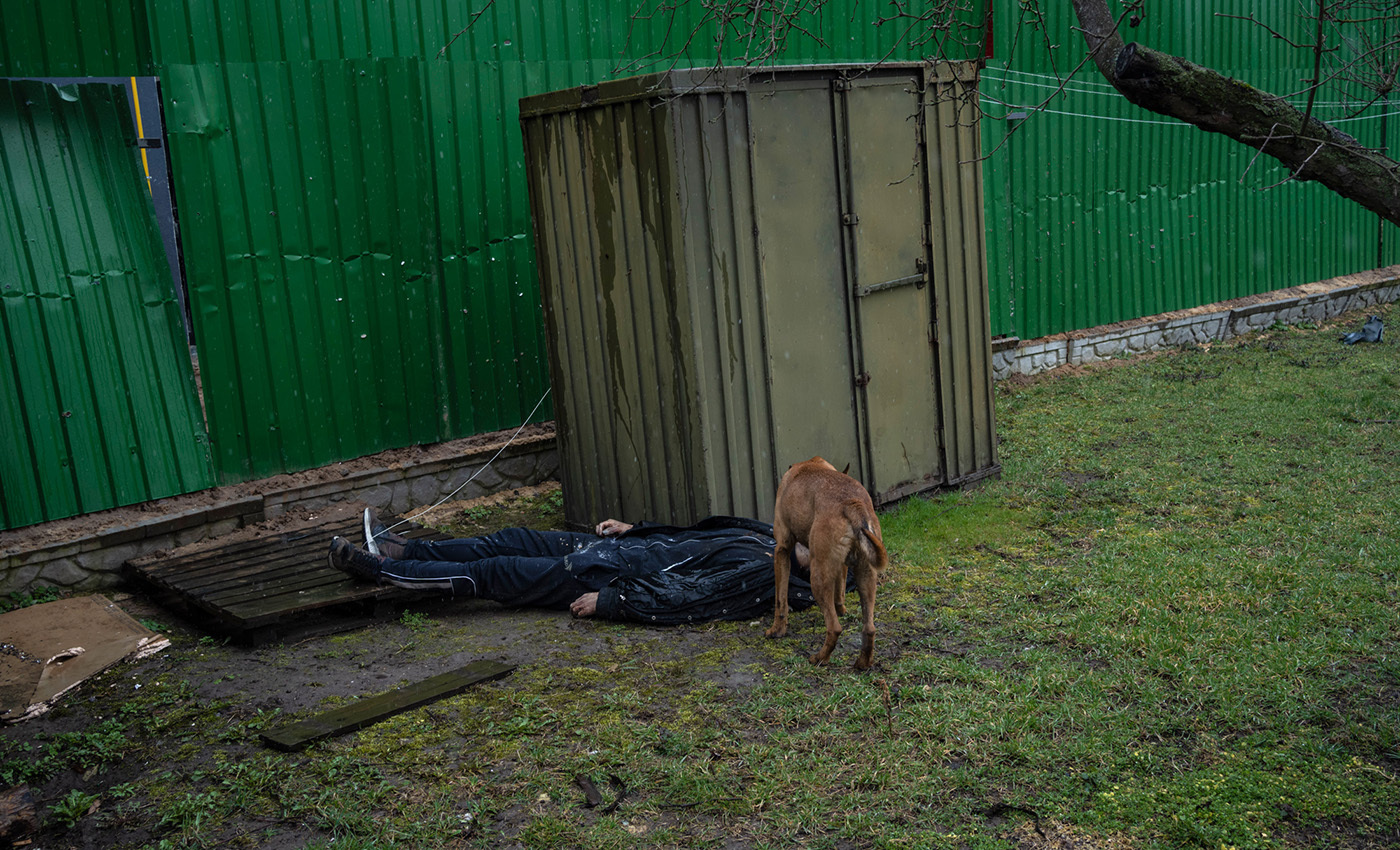 Overall we had three people killed, three were buried [in the yard], but the other two – I don't know where exactly. [Melnichuk] was taking pictures of them loading shells, they took him out and... there was a tank here, they just took him out, stripped him down, put him on his knees, and shot him at point-blank range.

They would not let us bury him, [the Russian soldiers] did not allow it. They killed him here, his body was lying here, it was impossible. They just wouldn't let us bury him. They said they would let him lie here, they did not even bury their own. They were looting flats, but not burying their dead. Their bodies were left here, our people took them away.

Then some old folks who lived at the fifth entrance and refused to go anywhere buried his body.